Philip Pearlstein was born in Pittsburgh, PA, in 1924. In 1941, his junior year in high school, he received his first recognition when awarded first and third prizes in Scholastic Magazine’s 14th National High School Art Exhibition. Upon graduation from high school in 1942, he enrolled in the Carnegie Institute of Technology but the draft limited his attendance to one year. After discharge from the army in 1946, he returned to Carnegie Tech where he received his BFA in 1949. Upon graduation, he moved to New York City where he pursued work in graphic design and received a Master’s degree in art history from New York University in 1955.

Pearlstein worked as a graphic designer for Life Magazine before becoming an instructor at the Pratt Institute, and then a professor at Brooklyn College; he has also served as a visiting artist at several prestigious institutions throughout the country. His work has been exhibited in several solo exhibitions throughout the United States with paintings in the collections of over 70 public art museums. Pearlstein served as a President of the American Academy of Arts and Letters from 2003-2006 and currently lives and works in New York.

“It is what is painted between the outlines that makes the difference between merely competent painting and really meaningful art.” 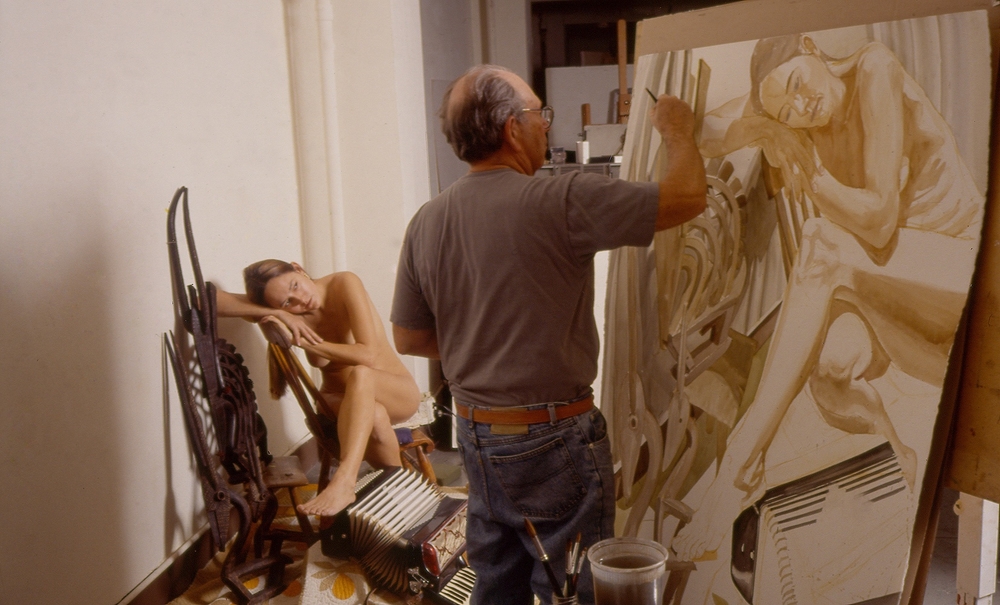 May 24:  Born to David and Libby Kalser Pearlstein in Pittsburgh, Pennsylvania

May: Drafted. After basic Infantry training in Camp McClellan, Alabama, he serves six months in Training Aids Unit in Camp Blanding, Florida where he picks up skills in layout, drafting, lettering and printing.

May: Discharged from army. Returns to the United States and lives in Pittsburgh, Pennsylvania.

Spring: Becomes assistant to Robert Lepper, head of the Design Program at Carnegie Institute of Technology, at the firm of Altenhof and Bown, Architects. Designs catalogs for building products through spring, 1949.

Fall: Enrolls as sophomore at Carnegie Institute of Technology. Studies with Robert Lepper, Balcomb Green, and Samuel Rosenberg. Meets Dorothy Cantor, George Klauber, and Andy Warhol (Warhola), fellow students at Carnegie Institute of Technology. Serves as art editor of the Carnegie Technical, the student publication of the Engineering School, through 1949.

Fall: Works with graphic designer Ladislav Sutnar in design and production of catalogs of plumbing fixtures and ventilators. Continues with Sutnar for eight years.

March: Moves to own apartment on East 25th Street.

Introduced to The Club, and attends until it disbands in the early sixties.

December: Painting included in a group at the Tanager Gallery, an early cooperative gallery in New York City.

Fall: Moves to Avenue A between 11th and 12th Streets. Joins Tanager Gallery

Summer: Spent on Deer Isle, Maine, and Mercedes Matter’s suggestion and draws boulders and uprooted trees to serve as the basis for later paintings.

September: Becomes Instructor at Pratt Institute, Brooklyn. Continues at Pratt through May, 1963.

Shares studio, first with Lois Dodd, then with Lester Johnson.

Summer: Publishes “Futurism and Some Other Corrupt Forms” in Art News .
Moves to West 89th Street between West End and Riverside Drive.

Begins painting directly from the model with Reclining Nude.

Summer: Publishes “Figure Paintings Today Are Not Made in Heaven” in Art News.

Publishes “Whose Painting Is It Anyway?” in Arts Yearbook 7.

February: Publishes “The Romantic Self Image is Gone” in Barbara Rose and Irving Sandler, “Senseibility of the Sixties,” Art in America.

August: Publishes “Why I Paint the Way I Do” in The New York Times, August 8.

Summer: Travels to Italy and paints on Amalfi coast.

Summer: Travels to the southwestern United States to prepare work for the Department of the Interior Bicentennial Exhibition.

Retrospective of prints and drawings opens at Finch College and travels through 1975 to the University of Texas at Austin, Cranbrook Academy of Art, Michigan; Notre Dame University, Indiana; Grand Rapids Art Museum,

National Endowment for the Arts Fellowship

Artist of the Year, American Friends of the Tel Aviv Museum of Art, New York, NY